Mr. Tabor is an international publishing and media executive and has been widely acknowledged as a pioneer in the electronic publishing industry. In the late eighties, Tom was part of a team that launched an Internet-based version of Supercomputing Review magazine followed by the highly successful HPCwire in the early nineties. HPCwire is recognized as the very first paid-subscription, paid-advertising publication distributed on the Internet and is today considered the worldwide industry publication/portal of record for the High Performance Computing (HPC) industry. (HPC is the segment of the computing industry where the internet and the WWW were first developed.)

Currently, Tom is CEO of Tabor Communications, Inc. (TCI). TCI is a leading international media, events, advertising and communications organization focusing on companies throughout the global advance computing ecosystem. Over the past 20+ years, TCI has grown to become globally-recognized as the preeminent information source for covering the fastest computers in the world and the people who run them. TCI companies include Tabor Advertising, a technology focused, full service advertising agency, and, Tabor Publications and Events with publications under the following titles - HPCwire, HPC Job Bank, HPC Product Showcase, HPCwire Soundbite (podcast), EnterpriseAI, Datanami and the following events – Leverage Big Data and EnterpriseHPC.

Tom has also served as publisher for HPCwire, EnterpriseAI, HPC in the Cloud, Digital Manufacturing Report, Datanami, Green Computing Report, On-Demand Enterprise, GRIDtoday, High Performance Computing - Contributions to Society (1996), The Emergence of Grid and Service-Oriented IT (2006), as well as producing a series of Grid VIP Summits worldwide (London - San Jose, Costa Rica ** - Philadelphia and Chicago). Tom was formerly the publisher of the award winning Supercomputing Review magazine and WEBster, a WWW portal. He has over 30 years experience in business-to-business publishing, with the last 24+ years focused primarily on advance computing (HPC) technologies.

Tom is a frequent speaker at global industry events and, has served as a leader and board member of many committees and organizations including; the National Center for Manufacturing Sciences' Strategic Interest Group on Digital Manufacturing - the Alliance for High Performance Digital Manufacturing - the Global Grid Forum's Awareness Council - SC(xy) Industrial Advisory Committee - The Humanities, Arts, Science & Technology Alliance & Collaboratory (HASTAC) - and the Institute for Computing in Humanities, Arts and Social Science (iCHASS) at NCSA. He also serves on the Steering Committee for the Organization of American States, Advance Research and Technology Collaboratory for the Americas (OAS-ARTCA). He's a board member of the National University Community Research Institute (NUCRI), a board member of Latte Stone Management and is a past board member of The LUX Art Institute.

In 2002, Tom was awarded the inaugural HPC Industry Recognition Award. The award was presented to Tom for his dedication to the HPC community worldwide and recognizes his efforts in promoting HPC industry credibility far beyond the boundaries of the industry's scientific and technical computing audience. 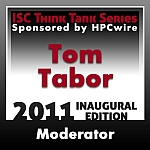 In June 2011, Tom developed the concept and participated as a moderator of the inaugural International Supercomputing Conference's (ISC) Think Tank Series. The program was a "meeting of the minds" between the thought leaders across HPC in discussions revolving around controversial and provocative topics that are impacting the HPC community today. The sessions were filmed during ISC'11 in front of a live audience at the CCH-Congress Center Hamburg.

At the 24th Annual Asian Business Association (ABA) Awards Gala, Tom was honored with the ABA’s Trailblazer Award. "The Trailblazer award is presented to an innovative business person who is of Asian or Pacific Islander decent or who has spearheaded a positive impact on the business environment of these communities," said Wendy Urushima-Conn, CEO of the Asian Business Association (ABA), who presented Tom with the award at the annual Gala on October 15th, 2014. "We have followed Tom's work not only as an internet publisher, but as a stalwart for both gender and ethnic diversity globally. We are very proud to honor Tom and the Tabor Communications organization, a Pacific Islander owned business, for being an early Internet publishing pioneer as the first paid subscription, paid advertising publisher on the Internet".

Tom was born on Guam and raised in Napa Valley, California. He did his undergraduate work in Political Science at University of California, Davis. Tom currently lives in La Jolla, California with his wife Verna (Vee) who is CEO of one of California's largest domestic violence, rape crisis, elder abuse agencies (ccssd.org). He is an avid skier and weekend golfer.

** The GRID VIP Summit, Costa Rica was co-hosted by Fernando Gutierrez, who at the time was Minister of Science and Technology for Costa Rica and co-chair of the Latin American Organization of Ministers and High Authorities of Science and Technology. This event was the launch point for many Latin American technology initiatives including the very successful ARTCA, The Advanced Research and Technology Collaboratory for the Americas. ARTCA is a collaboration of high-end research, industry, government and nonprofit organizations across the Americas, which links research and technology activities in North, Central, and South America (collectively, the Americas) to address pressing problems that arise in the natural sciences, medicine, technology, and the human sciences. (hpcinthecloud.com/hpccloud/2005-02-28/gridtoday_launches_technology-diplomacy_initiative.html) 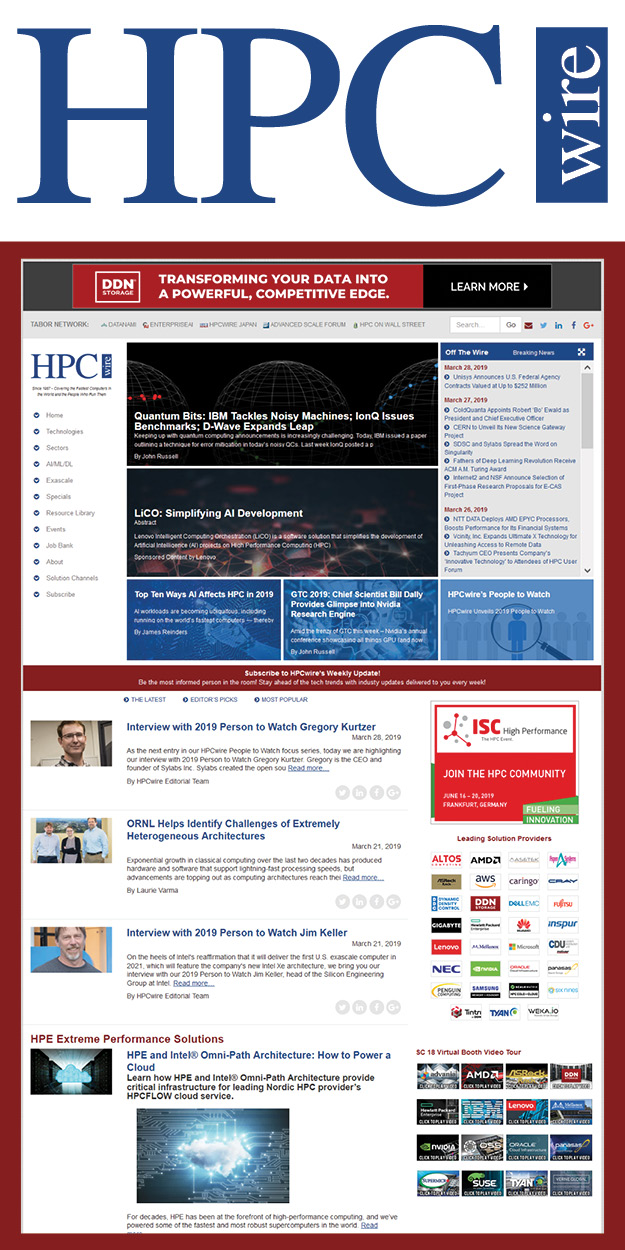 HPCwire is the #1 news and information resource covering the fastest computers in the world and the people who run them. With a legacy dating back to 1987, HPC has enjoyed more than three decades of world-class editorial and topnotch journalism, making it the portal of choice selected by science, technology and business professionals interested in HPC, AI and data-intensive computing. For topics ranging from late-breaking news and emerging technologies in HPC, to new trends, expert analysis, and exclusive features, HPCwire delivers it all and remains the HPC community's most reliable and trusted resource.

Advanced Computing in the Age of AI

EnterpriseAI further sharpens and expands upon the already extensive coverage originating from its predecessor, EnterpriseTech, on machine/deep learning, advanced modeling/simulation, high performance data analytics and the technologies that enable them, including; high performance data centers, cloud computing, high performance storage, AI silicon and AI frameworks – spanning all relevant verticals. With its focus trained on decision-makers, technologists and thought leaders across the technology spectrum, EnterpriseAI delivers reporting, insight and analysis on AI technologies, tools and strategies that enable business deployment and integration in the enterprise. 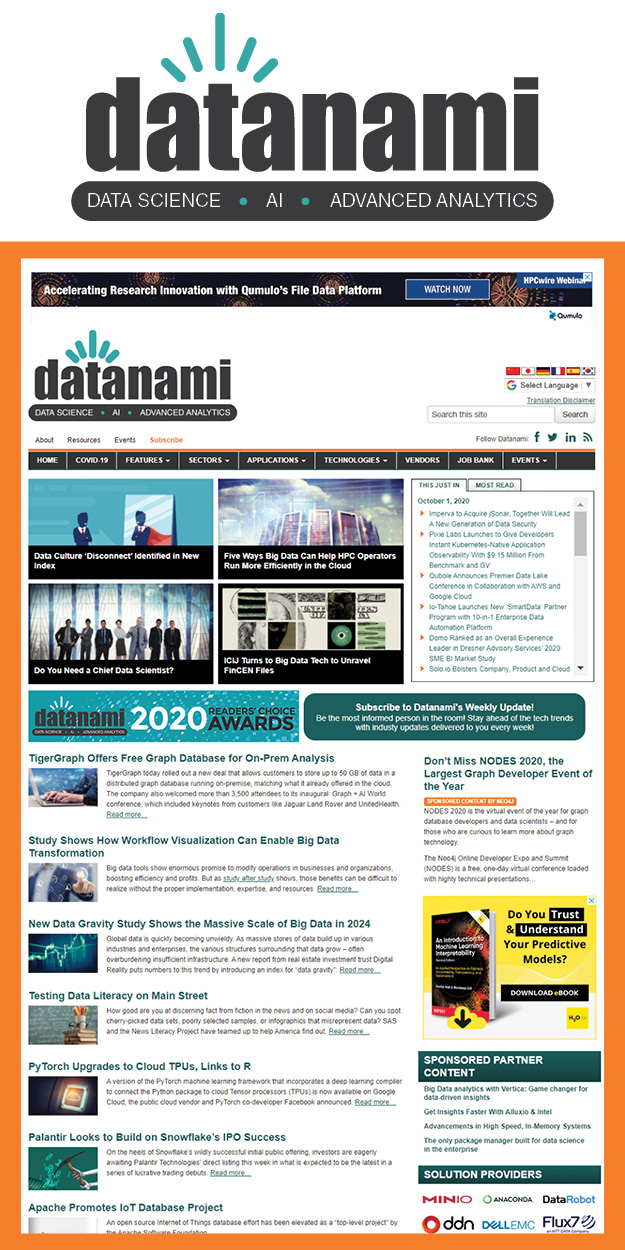 Datanami is the news portal dedicated to providing the latest insights, analysis and information surrounding emerging trends, advances and solutions in big data. The portal illuminates cutting edge technologies including networking, storage and applications, and their impact upon business, industry, government, and research. The publication examines the avalanche of unprecedented amounts of data and the effects the high-end data explosion is having across the IT, enterprise, and commercial markets.